What is a C-section defect (CSD)?

A CSD is a defect  in the muscle layer of the uterus that has the appearance of a pouch over a previous C-section scar. 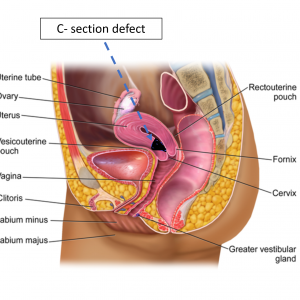 How common is CSD ?

The prevalence of CSD is not known, but may be more common than realised. It has been reported amongst 20 to 80% women  after 1 or more previous C-Section.

What are the potential clinical implications of CSD?

The majority of women who are found to have a CSD defect on ultrasound do not encounter or report any problem. However, in a small percentage of women with CSD, they may encounter a variety of clinical problems such as:

Although the causal relationship between C-Section defects and related symptoms has not been established, treatment has been reported to be successful in the resolution of symptoms.

How can C-section defect be corrected?

There are a number of ways of correcting a C-section defect:

A systemic review of the above-mentioned methods concluded that laparoscopic surgery was superior in reducing abnormal uterine bleeding and scar depth than the other surgical interventions.

In the largest prospective study reported in the literature to date, laparoscopic surgery was found to improve the main presenting symptom in 80% , resolved intra-uterine fluid in 87% of women, and significantly increased residual myometrium (Vervoort BJOG 2017).