What is an endometrioma?

Endometriosis is a condition in which endometrium-like tissue grows in locations outside the uterus. When endometriosis occurs in the ovary, endometriotic cells can form a menstrual fluid-filled sac. This is called endometrioma, endometriotic or ‘chocolate‘ cyst due to the appearance of old-blood pigmentation. 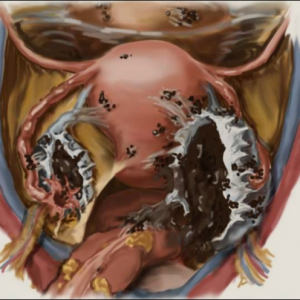 How common is endometrioma found?

The exact prevalence of endometrioma is unclear, but may be detected on ultrasound in 15-40% of women with symptoms (pain or infertility) suggestive of endometriosis.

The presence of endometrioma is often a marker for co-existing deep endometriosis elsewhere in the pelvis, including the bowels and urinary tract

What is the ‘best‘ treatment for endometrioma?

There is no uniform agreement on the single ‘best‘ treatment for endometrioma. While surgical removal is the traditional treatment approach,  the best management should be based on individual patient’s factors including type and severity of symptoms, age, fertility and treatment goals (reducing pain, maintaining fertility,excluding malignancy).

The choice of treatment options therefore varies from person to person and from time to time. Fundamentally, the management options  include:

This is an option when endometrioma is small, has ultrasound appearance consistent with a benign cyst and causes no symptoms.

In general, drug treatment of ovarian endometrioma is not curative because drug does not eliminate cyst formation. This means that the endometrioma may enlarge or become symptomatic once medical treatment is ceased.

There is no consensus or high-quality evidence to guide decision-making in every situation. However, surgical removal of endometrioma may be appropriate when:

There is consensus behind the use of  laparoscopic surgery rather than open laparotomy for treatment of endometrioma as the former is associated with shorter hospital stay, faster recovery, less analgesic requirements, decreased costs, and lower incidence of adhesions.

The answer to this important question is contentious due to the lack of high-quality evidence and conflicting expert opinions. While the precise cause of  endometriosis-related infertility remain uncertain in individual cases, the proposed mechanisms  include (i) chronic inflammation, (ii) tuboperitoneal anatomic distortion, (iii) compromised ovarian reserve Iv) poor oocyte or embryo quality and (v) reduced endometrial receptivity.

It is generally accepted that (i) fecundity rates may be reduced in women with endometriosis (ii) women with endometrioma undergoing IVF have lower oocyte yield per cycle, higher cancellation rate and (iii) the presence of ovarian endometriomas is usually associated with  moderate or severe disease elsewhere in the pelvis.These reasons would appear to support surgical treatment of endometrioma.

However, it is also recognised that:

This conflicting evidence is because there are no randomized trials comparing laparoscopic excision to expectant management before IVF–ICSI cycles.

Surgery for severe endometriosis, including endometrioma, may be considered before IVF in the following cases:

Hence, individualisation of care for women with pelvic endometriosis and endometrioma-associated pain and subfertility is important to optimise outcomes.